Be Your Own Action Hero! – Carla Cackowski Workshop 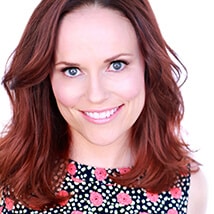 Saying yes isn’t just agreeing to the reality your partner is creating in the scene. It’s also saying yes to actively moving the scene forward. This workshop focuses on making active, fun choices so you can avoid talking about what you’re doing and pursue tackling what you’re doing instead. If you have been in a rut or recently found yourself standing around onstage with nothing more to offer than being a talking head, this workshop is for you!

Enroll in Both of Craig & Carla’s Workshops!

Carla Cackowski is an improviser, writer, podcaster, and nap-lover. She toured all over Europe, Alaska, and the Caribbean performing comedy with The Second City. She’s a member of SAG-AFTRA and has done voiceover work on shows for ABC Family, TBS, and Disney. She wrote and performed five solo shows that were produced in Los Angeles, and her comedic monologues were published in anthologies by APPLAUSE BOOKS. Carla hosts “Improv Yak,” a shop-talk podcast about improv comedy.

When they’re not touring their two-person improv show “Orange Tuxedo, “she and her husband Craig Cackowski co-host a podcast called “Craig’s List.”  Most recently, Carla has written for sketch shows on PBS Kids and Dreamworks TV. She taught improvisation and directed sketch shows at The Second City Hollywood for eight years before moving to Portland to become the Co-Artistic Director at Curious Comedy Theater for a year. She’s now the Training Center Director at Mi’s Westside Comedy Theater in Santa Monica, California, where she plays on the House Team, “County Line.”

Orange Tuxedo (Los Angeles, CA) is a two-person improv show from a husband and wife team who, collectively, have been doing improv for seven hundred years. The perform “Close Quarters,” with a focus on creating grounded relationships formed by eccentric characters. If you like comedy, you may have seen Craig wear various mustaches and costume pieces on Comedy Central’s Drunk History. If you like drunken history, you may have seen Carla drink various beers on Instagram.